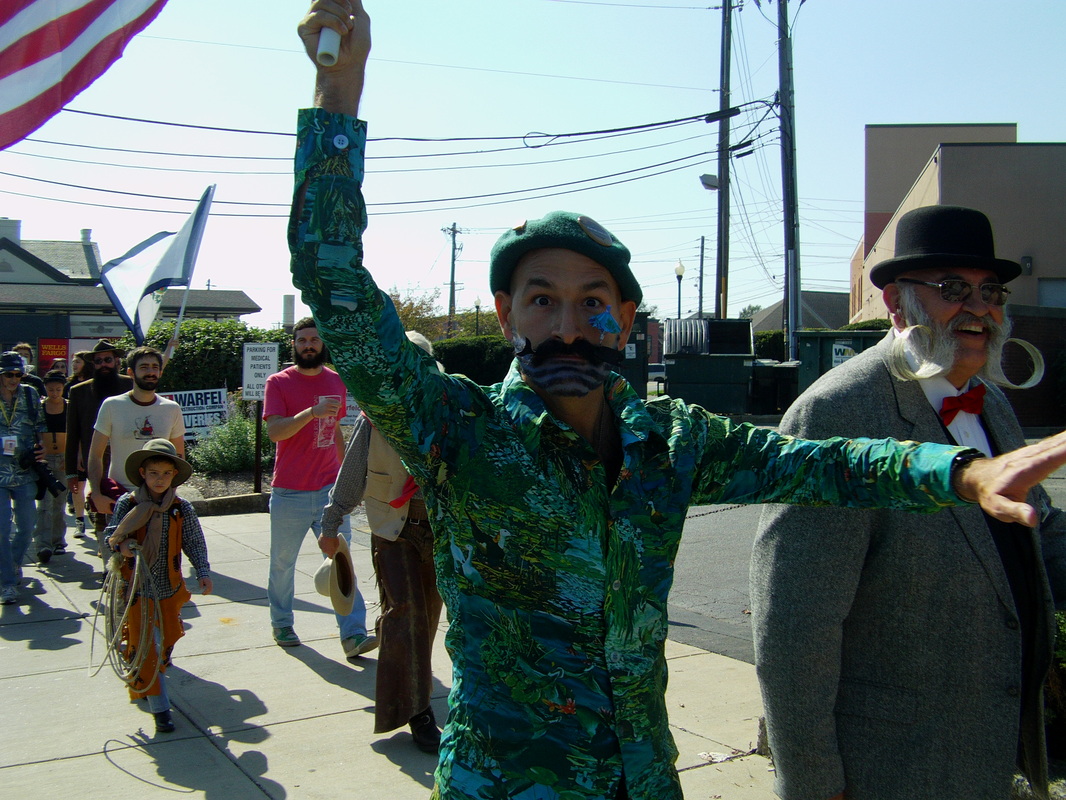 Cheeky Bastards: Hundreds of contestants descend on Amish Country to fight for facial-hair dominance in one of the nation's top beard competitions 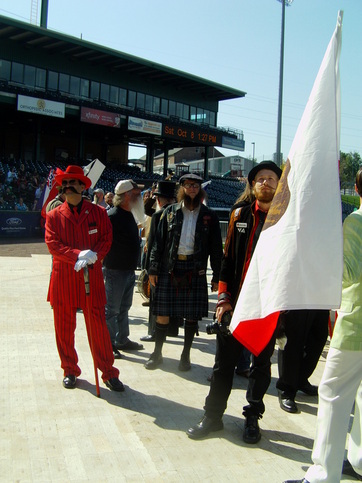 The crowd moans in mock horror.

A few minutes later, the behemoth is led away by the officer. “I’m so sorry about that,” says Passion. “Shall we continue with the beard competition?”

That’s right -- beard competition. It’s October 8, 2011 and the city often known for its own bearded Amish fellas has been invaded by hordes of mutton-chopped and mustachioed out-of-towners for the 2011 National Beard and Moustache Championships. Competitors hailing from 35 states -- as well as Germany, Canada, and New Zealand -- are jockeying for facial-hair domination and cash prizes in five divisions: Moustache, Partial Beard, Full Beard Groomed, Full Beard Natural and Freestyle. 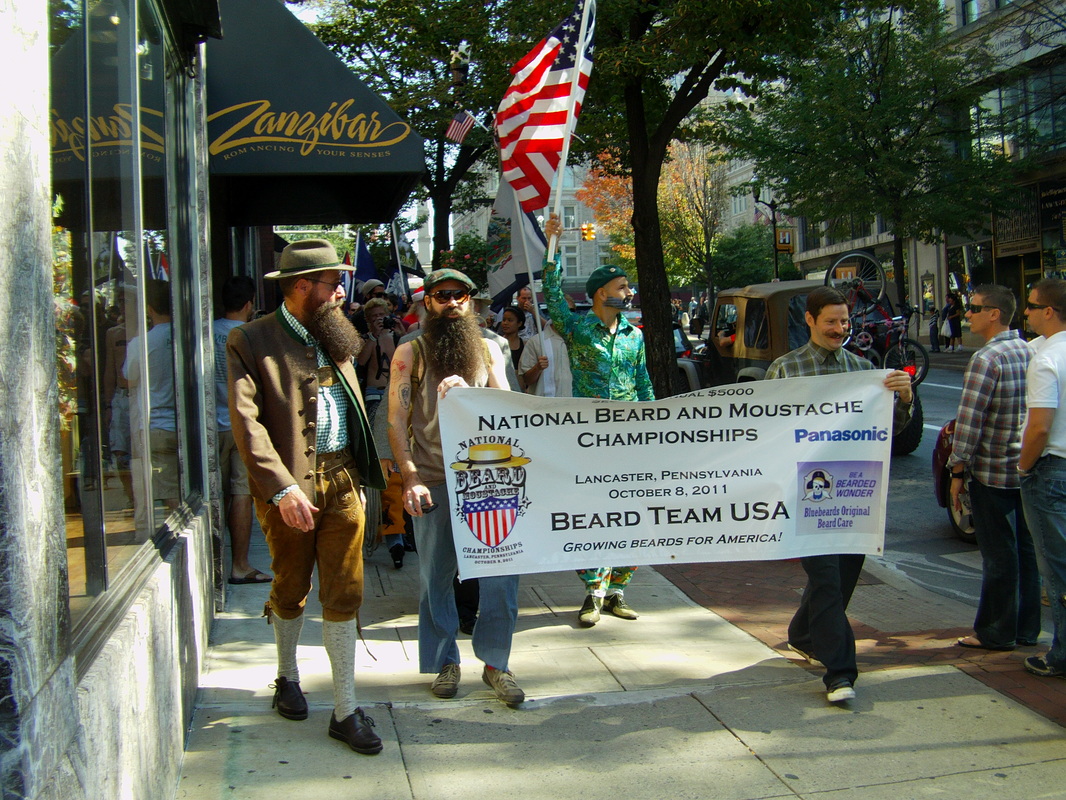 Following a press conference at the Marriott that introduced the day’s judges -- former Pittsburgh Steeler Justin Hartwig, Miss Pennsylvania Juliann Sheldon, United States National Rugby Team member Phil Thiel, Dutchland Derby Roller Jenn Bricker and World Beard & Moustache freestyle champion Willi Chevalier-- Phil Olsen is walking behind a giant banner promoting the upcoming throw down. The brown-bearded 62-year-old, who's wearing calfskin lederhosen with a button-down brown coat, is surrounded by a parade of men with pointy moustaches and sideburns that poof out proudly. To his right, 38-year-old Keith 'Gandhi Jones' Haubrich of Seattle is bugging out his eyes and pursing his lips in hopes of shocking passersby with the whale shape he’s created above his upper lip. The 30-minute walk -- during which someone yells “Grow a beard or you hate America!”  --- leads to Clipper Magazine Stadium. Normally home to the minor league Lancaster Barnstormers baseball team, the stadium will temporarily house quite a different event.

“I’ve been very dedicated to making it bigger, better, more inclusive,” Olsen explains. After stumbling on the World Beard and Moustache Championships while vacationing in Ystad, Sweden in 1999, the Lake Tahoe, California resident returned was determined to bring beard competitions to his own country. He founded Beard Team USA and began organizing contests in 2003, helping establish local chapters whenever he could (there are more than 50 today). Over the last few years, beard competitions have garnered a lot more attention, he says, with coverage ranging from Sports Illustrated to The Times of India. Olsen and Passion are even among the personalities followed in the Independent Film Channel’s summer reality series, “Whisker Wars.” 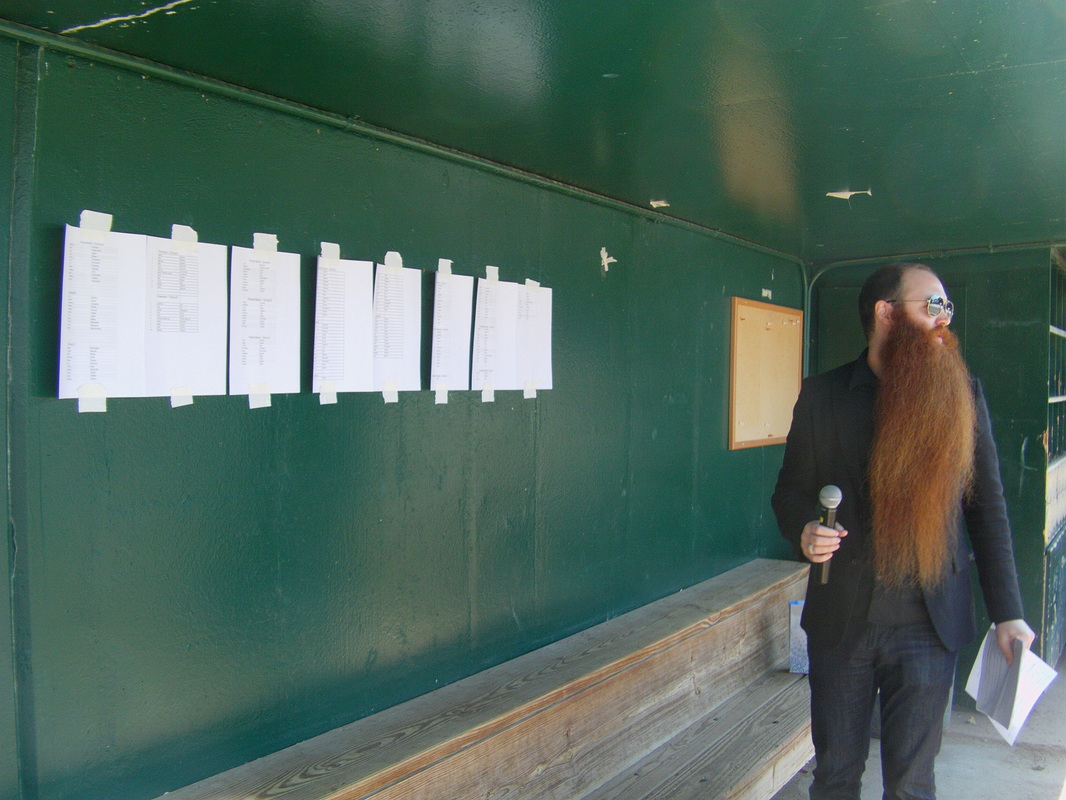 “Everybody who is interested should be welcomed,” Olsen continues. “There are others who don’t share my vision. There’s a lot of fighting. Which I think is completely unnecessary. There are some people who do not think an event like this should be held in a stadium because they feel it should be a smaller, more intimate -- exclusive -- event for themselves. I have been firmly committed and have been from the beginning of trying to maximize participation in all ways.”

It seems he’s succeeded. There are over 200 competitors and 2,000 some attendees streaming into the stadium. Ask any bearded guy how he found out about the contest and he’ll most likely answer like Anthony J. Francolino of Eral, New Jersey. “I was looking online for things to show my beard off and in doing so, I found Beard Team USA,” says the 34-year-old president of the Tri-State Beard & Moustache Club. “I thought, ‘There’s no way.’ I contacted Phil and said, ‘What do I gotta do to get on the team?’ And he’s like, ‘Would you like to open up a local chapter?’

It’s 1:15 p.m. when Passion -- himself a two-time full natural beard world champion -- takes to the stage to get things rolling. The moustache category is up first with 33 contenders. Contestants line up in groups of 10 to 12 and the top three selected by the judges advance to the finals. Passion quickly runs through what qualifies as a moustache and it soon becomes clear that while this event is whimsical, it’s still somewhat serious. 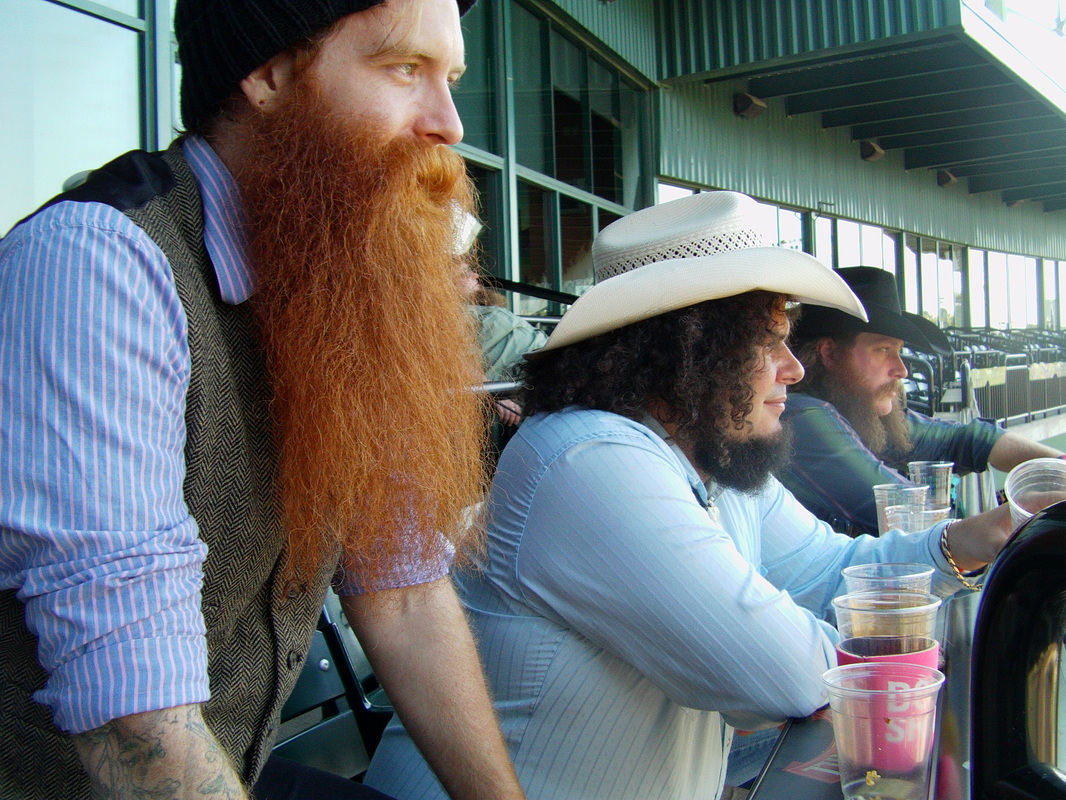 An excerpt from the judging criteria: The moustache is the hair that grows on the upper lip but can also include hairs growing from elsewhere on the face that are a natural extension of the shape of the moustache. Therefore Fu Manchus, walruses and horseshoe styles are all considered moustaches …

Once he’s finished reading the rules, Passion gestures to the men behind him. “Ladies and gentlemen our first competitor: Patrick Gorman.” A guy donning jeans, a white button-down and a bow tie strolls to the front of the stage and smiles at the judges. He could be just about anybody’s uncle, dad or coworker save for one distinguishing feature: His bushy, dirty blonde moustache that proudly curls up at its ends. Minutes later, baby-faced Jacksonville, Fla. resident Sam Holcombe draws gasps from the audience when he tugs on the wiry curls above his lip to unwind them into long strands five inches from each side of his face.

As the whiskered pageantry continues, the second floor skybox is teeming with contestants milling around and catching up. Many of the men know one other from previous beard events; some grumble that there’s only one free keg of beer. Those aren’t the only ill words, however. Hang around long enough and you'll learn of a little controversy beneath some friendly furry facades. 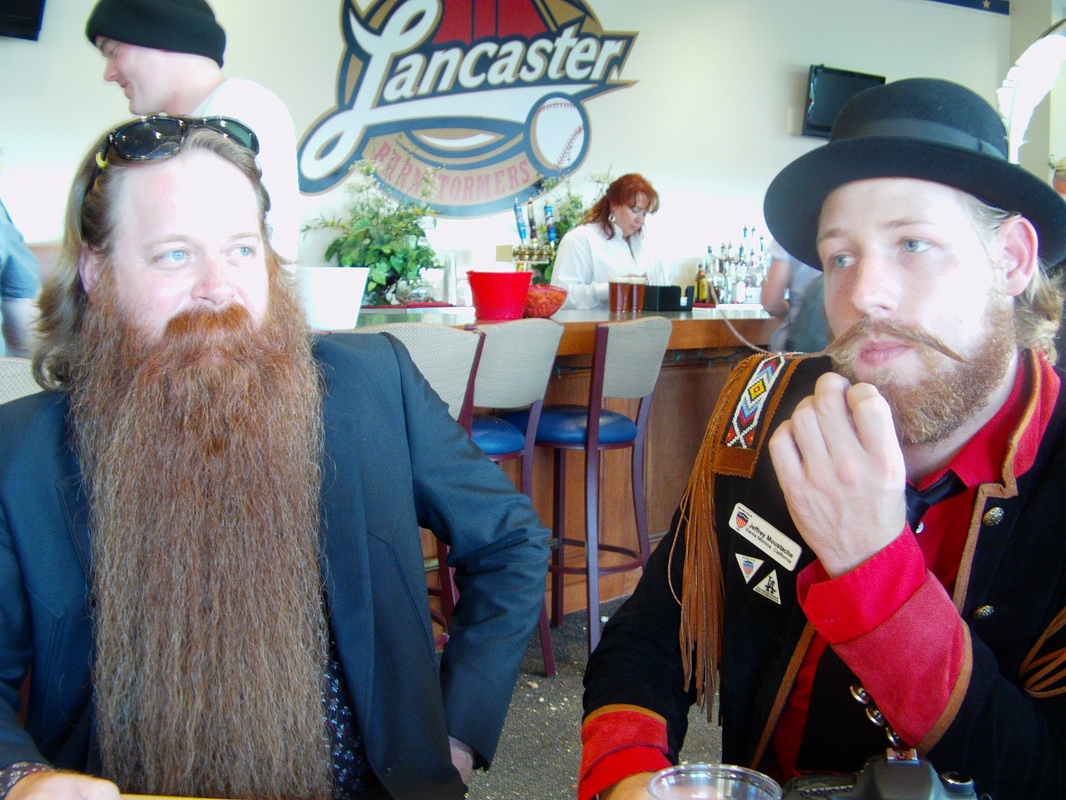 Just sit next to boys in the Austin Facial Hair Club, also featured in “Whisker Wars.” Unlike most of the participants here, this independent club of 20-plus members is not part of Beard Team USA. “We don’t want to be associated with the way Phil runs stuff,” says 34-year-old Partial Beard competitor (and 2011 finalist) Mike Schrader. “He is for profit. … I’m not strictly for charity, but all of our T-shirts and stuff get more club members to go to stuff like this.”

“We don’t want to be the kids like ‘I’m taking my ball and going over here,’” he explains. “We’ll compete in stuff like this, we just want there to be transparency behind it. He’s making money. Take my $40. When you register for this contest, you get an email receipt that says ‘$40 paid to the order of Phil Olsen.’ It’s kind of ridiculous.” 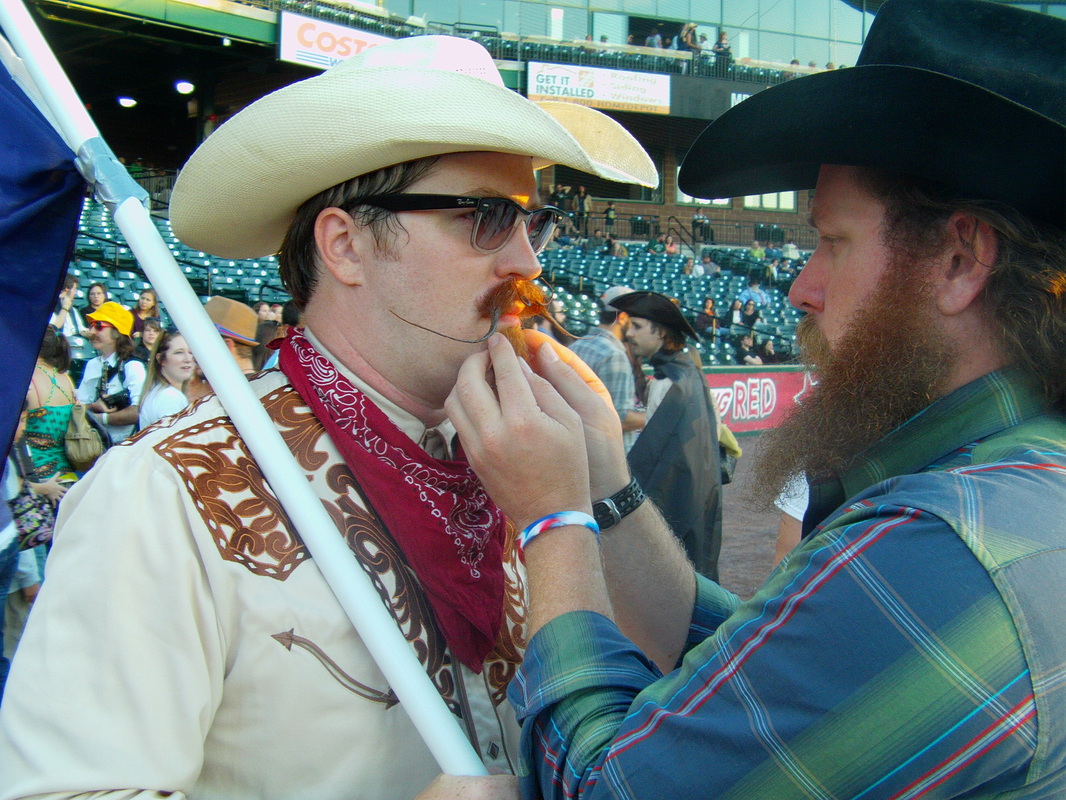 The tension between the two groups is palpable at times. On seeing AFHC president Bryan Nelson at the press conference, Passion confronts him, asking why he’s come. Afterward Nelson, a 39-year-old with a full red beard says, “Phil started what I thought was a fake rivalry a couple years ago before the world championships in Alaska. He called me up and said, ‘Hey, we’re trying to get some press it would help if you and Jack were like rivals. We’ll play it up that the Texas team is gonna come.’ I said, ‘Okay, as long as Jack’s cool with it.’ I kind of get the impression that Jack never knew it was fake.”

As for Passion, he doesn’t deny the exchange, but defends it. “They talk trash about Beard Team USA and then show up at the events. You know? I just continue to do what I do and they continue to make themselves look bad. It just gets worse and worse. …  I legitimately asked why are you here? If you don’t want to be part of this, why do you continue to be part of it? It’s a legitimate question.”

Despite this, the angst roiling beneath the surface is hard to detect unless you actively look for it. (Although watching Passion ask Nelson what’s it like to place second in full beard natural makes for good people-watching.) 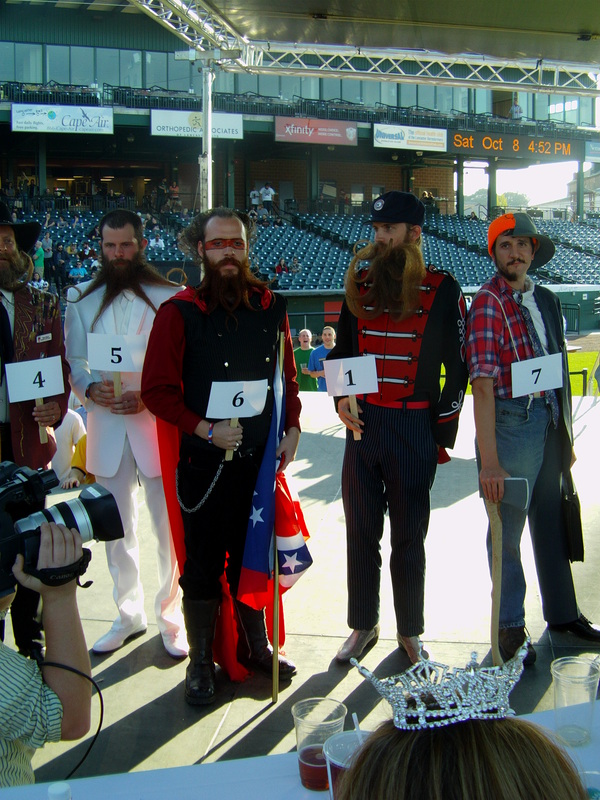 By eight o' clock, winners have been announced and all misgivings seem to have been laid aside for a jubilant celebration of beard-dom. Olsen reveals  to triumphant cheers that the next nationals will take place in Las Vegas on Nov. 11, 2012 .

Patrick Gorman takes home the moustache title; Toot Joslin of Tahoe City, Ca. wins partial beard; John Myatt of Los Angeles has full beard groomed; and John Burgess of Martinsburg, West Va. wins full beard natural. As for the freestyle competition, this is the category in which creative ingenuity reigns supreme. Twenty-nine-year-old Jonathan Rice of Plantation, Florida was up against Haubrich’s waxy whale moustache, and guys like Brian Quein (aka the “Electric Starfish”) who styled his beard into four points and embedded an electric zapper in the bristles beneath his chin. Yet Rice’s loops -- which he says took hours to create using two-liter bottles and hairspray -- landed him the national freestyle title. Each first-place winner gets $600 in prize money, a plaque and swag from sponsors Panasonic, Bluebeard and VitaBeard.

“I’m honestly here to have fun and show off my beard,” Rice says. “I’ve put a lot of care and hard work into it. If I can find people who appreciate it, that’s awesome.” 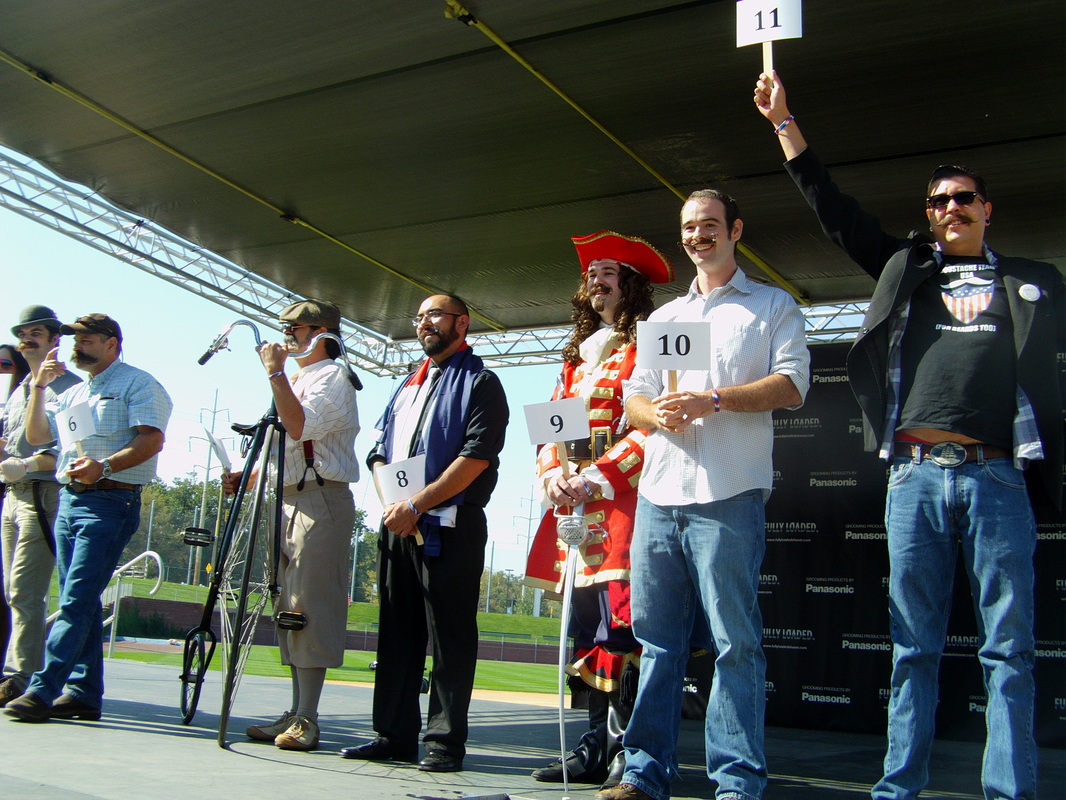