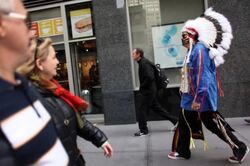 On a gray October morning, the Lincoln Memorial is teeming with tourists. Many are so intent on jockeying for a good spot to take a photo of the presidential statue, they seem to miss the 6-foot-4 man wearing a feathered headdress.

With a black handprint painted across his unsmiling face, he looks like a Native American caricature: black wool leggings bordered with fringe and a matching loincloth hanging from a belted loop. At times, he holds cardboard signs saying: “My Spirit Animal Is White Guilt” and “This Used to Be Indian Land But Everything Went to Crap.”

This is the fourth time Montclair artist Gregg Deal has brought his performance piece, “The Last American Indian on Earth,” to this well-trod spot.

Murder in the Village: With No Witnesses and Little Evidence, the Mystery of Carl Diener’s Death Seemed Impossible to Solve 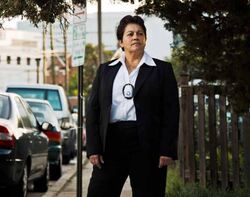 Tammy Bagnato was about to break the law. It was 5:40 in the morning, just a few days after Christmas 2009, and she was standing outside a ground-level apartment unit at the Fort Strong Properties complex, trying to find a way inside. She had already tried the windows and the sliding-glass door, to no avail.

She called 9-1-1 to warn the Arlington County Police dispatcher that she was ready to break the door down.

“Just stay there. I’ll have someone there right away,” the operator told her.

The apartment, on North Calvert Street in Arlington, was the home of Bagnato’s friend and weekend biking companion, Carl Diener. He had lived there 35 years.

Diener worked at the Arlington Sport & Health on North Kirkwood Road and was known to be punctual. Early birds like Bagnato counted on him to open the health club in the wee hours so they could fit in their workouts before work.

“He was the only person I actually saw every single day of my life,” says Bagnato, now 47, a trim brunette with long hair. “I knew his ways. I told him, ‘If you ever don’t show up, I’m calling the police.’”

After a night of drinking, Brandon Hill and Peter Chang slid into a booth at Plato’s Diner in College Park with friends.

Hill had just graduated from the University of Maryland, and Chang was finishing up his senior year. Neither was putting his major to much use yet. Hill, with a graphic design degree, was shlepping from Towson to Baltimore every day to work in visitor services at the National Aquarium. Chang, living in a College Park group house, was working part time at the Burtonsville Hobby City.

Their real passions were what they did after work: Chang toured and competed with the All Ways Rockin’ Dance Crew, which he helped found. For Hill, it was art. He had begun experimenting with photo-realistic-style drawings and woodworking techniques he learned from his father, a carpenter.

“I built a sail,” says Hill, 29. “It was one of my first really nice wood pieces that had no [expletive] purpose in life but to exist.”

As they dug into the hamburgers, steak ’n’ cheeses and fries before them at Plato’s, the conversation turned to what qualifies as art. Earlier in the evening, Chang had leafed through a book that mentioned the 1960s performance artist Yves Klein. Some of Klein’s well-known pieces were made by dragging and pressing naked women covered in blue paint onto large canvases.

An Ex-Model, a Wild Man and the Making of an Outrageous Movie

Ginger Baker is furious. The legendary 70-year-old drummer brandishes a cane as he stomps across his South African yard toward a documentary filmmaker named Jay Bulger. Baker leans through the open door of Bulger’s Toyota 4Runner, angling the cane toward him.

“You’re really going to hit me with a [expletive] cane?” says Bulger, sounding incredulous and provocative at the same time.

After all, there’s a cinematographer next to him, with the camera rolling.

“I [expletive] well am!” Baker barks. “I’m going to [expletive] put you in hospital!” The former Cream drummer thrusts the cane forward. There’s an “Oof!” from Bulger, then Baker straightens up — he’s wearing sunglasses that can’t hide his wide-eyed glare — and storms into his house.

Bulger looks at his reflection in the car’s visor mirror. Blood trickles from his nose. “Ginger Baker just hit me in the [expletive] nose,” he says matter-of-factly.

The altercation, painful as it is, isn’t a total waste. After all, it makes for great footage. “In my mind, I’m thinking, ‘God, this is pretty awesome,’ ” recalls the cinematographer, Eric Robbins.

And thus was born the opening scene of “Beware of Mr. Baker,” the first documentary by Bulger, a Washington native who, at age 30, already has been a boxer, an international fashion model, a music video director and a freelance writer. The movie has scored a coveted premiere slot at the South by Southwest film festival later this week. Bulger hopes it will kick-start his career and, maybe, revive interest in Baker’s.

“Ginger Baker is the greatest drummer of all time,” Bulger says.

Cheeky Bastards: Hundreds of Contestants Descend on Amish Country to Fight for Facial-hair Dominance in One of the Nation's Top Beard Competitions

When an American in Afghanistan Fell in Love with a Stray Dog, She Couldn't Leave the Animal Behind

Martin, 31, spent her days in Afghanistan’s Helmand province, where she worked on an agriculture program.

When Weird is Wonderful: A Sideshow Husband-and-wife Team

Thrill Kill Jill smiles coyly and arches her back against the wooden board behind her. Her raven hair tumbles down alabaster shoulders and a silvery fringe bikini. She raises her tattoo-adorned arms overhead and directs her gaze across the stage

There stands Tyler Fyre, dressed in red pants, suspenders and a black tank top, with a dagger in his right palm.

Before them mill about 150 people, including men in top hats and girls on roller skates. The colorful crowd is here for the Sideshow Gathering, a convention for performers whose many talents include sword-swallowing and sticking nails up their noses.

Unnecessary Roughness:  Why Does Prince George's County Use SWAT Teams for so Many Nonviolent Offenses?

Walking around Cheye Calvo’s living room in the Prince George’s County town of Berwyn Heights, it’s hard to believe that 2½ years ago it was a scene of violence. Calvo stands by the fireplace in a green L.L. Bean sweatshirt, jeans, and cocoa-colored Crocs.

“Want to see them?” he asks, gesturing to a crimson wooden box to the left of the mantle. On top of it are a framed picture of two black Labradors, a figurine of two dogs, and a stuffed toy puppy. He opens the box, revealing two gallon-size Ziploc bags. Calvo takes one in his left palm—“Payton”—and lifts the second into his right. “Chase,” he says. “You know by size.”

“You always think, ‘At least he went peacefully,’ ” Calvo says. “That’s the consolation you use when someone passes. Well, my dogs didn’t go peacefully.”

One evening eight years ago, Stephen Gregory Smith did something he admits sounds a little silly now: He covered the windows of his Fairlington apartment with blankets. His mother had called earlier from Connellsville, Pa., to tell him she’d seen a news report that the Beltway sniper, then rampant, had shot someone near his house.

Once he’d covered his last frame, Smith returned to his couch to continue watching George A. Romero’s Night of the Living Dead.

Patrick Owens was frustrated. As the bar manager for Bourbon's Adams Morgan location, he noticed more and more chalkboard stands on the 18th Street sidewalk advertising drink specials with bland happy hour cliches rendered in slapdash lettering. The lack of effort perturbed him. "It's a defeatist attitude: 'Oh, it's just going to get wiped away, so we don't need to make it look nice at all,'" he said.

It was a mind-set Owens couldn't relate to. During art class at Fairfax's W.T. Woodson High School, he had been the student who would take a five-minute drawing exercise and work on it for the entire period. "The teacher was really impressed," he recalls, "but she was like, 'You kind of missed the point.'" His emphasis has been to put as much effort as possible into his creative endeavors -- no matter the shelf life.

Answering a Call to Arms: Ladies Wrestle for Charity

It's unclear whether creativity or whimsy was running wilder between exercise pals Jennifer Hoyt Tidwell and Jodie Plaisance that November day in 2007, but what resulted was anything but monotonous.

They invented a fantasy sports league in which outrageously dressed, bawdy femmes challenge each other to arm-wrestling matches. Then they dumped the fantasy part.

"Soon I started asking people, 'Would you join an arm-wrestling league if you could?' " Hoyt Tidwell, 37, says with a laugh. "I was half-kidding."

Lance Kasten stands in the gritty back alley of the 9:30 Club, looking over a handwritten list of spins and pelvic thrusts.

"I'm going to do a 360 hop," he says. "Then I'm going to do a shake. Then I'm going to do one pelvic thrust. ..." He, like his opponents at the regional contest of the U.S. Air Guitar league, will spend 60 seconds jamming and gyrating to a soundtrack of his choosing -- holding an imaginary instrument. Kasten's performance will kick off with the Black Eyed Peas' "Pump It" before segueing into Van Halen's "Somebody Get Me a Doctor." "There's a spot right in it where I can take the guitar off, throw it up in the air and do a quick 360, catch it -- and then I'm going to punt my air guitar."

He scans the list a few more times before putting it in his back pocket. Then he hotfoots it to his SUV parked on V Street.